When we think of robots, we don't usually think of remote controlled cars. We imaging Rosie from the Jetsons, or R2-D2: highly capable autonomous systems. While real robots are still far from that level of functionality, they do operate with some autonomy. Quadcopters automatically turn simple up/down/left/right joystick input into four motor torques. Robots in labs detect objects around them and plan a base motion and torques for seven arm joints to move into place to grasp an object at an appropriate angle.

We'll start with the simplest algorithm for navigation planning of a differential drive mobile robot.

What is the simplest set of instructions you could give to a blindfolded person to get them from where they are to some other spot? If the point is behind them, we might say something like "turn around, and take four steps forward." We're going to code up this simple algorithm which I call "turn and go."

The study of algorithms, and of computer science, is of converting some process into precise rules and instructions that any "processing machine" may "execute" them correctly.

Every computer program is a model, hatched in the mind, of a real or mental process. These processes, arising from human experience and thought, are huge in number, intricate in detail, and at any time only partially understood....

For all its power, the computer is a harsh taskmaster. Its programs must be correct, and what we wish to say must be said accurately in every detail.

To that end, how can we exactly encode a set of instructions like "turn towards the goal" and "move forward three meters"? Again, we turn to mathematics for an exact model of angular and linear distance.

If we are currently at a point start, and want to move to point goal, we need to know two things: how far to move, and in what direction? If we setup the problem as shown below, that means we want to find and . 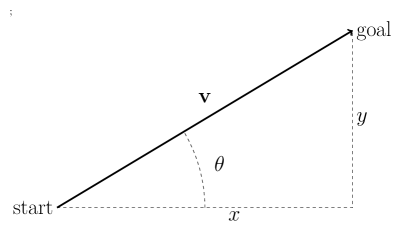 A great but sometimes confusing thing about how we represent our state using linear algebra, is that vectors and points are equivalent. In other words, is both a vector from to , and the point . So any point can be treated as a vector. Delving a bit into linear algebra, we know that subtracting vector from yields a vector from the "head" of to the head of . Since points are vectors, is found by simply subtracting start from goal. And will have the and components we expect from any point or vector in the space, and necessary to do our trigonometric calculations.

Given our knowledge of trigonometry, we can solve for 1:

And by definition we know the magnitude of a vector, :

So, with our desired heading and travel distance, we can start to think about how we want to communicate this information with or robot.

Control systems are divided into many layers. First, at the lowest level, are the capabilities of the machine. Our little diff-drive robot in reality would have two control inputs, the electrical current to each wheel. Woah, that's pretty far from autonomous navigation!

Our simulated bot doesn't have an electrical system however, and doesn't even have wheels. So what do those electrical signals provide at a motion level? If both wheels move the same direction at the same speed, we move forward or backward in a straight line. If we cause the wheels to turn at different speeds, the robot will turn (hence differential drive). We could measure the movement of the wheels in terms of torque, but we probably want an interface that accepts velocity commands. So, at the lowest level we'll consider, the robot accepts linear and rotational velocity commands.

Roboticists use Screw Theory to define and describe rigid body kinematics. Screw Theory defines a concept called a Twist that represents the velocity of a rigid body as a rotational velocity around an axis, and a linear velocity along that axis. We'll use a simplified Twist to represent the velocities our robot will execute.

Let's look at some code.

And now, a single control step for our robot (in our newly-refactored DiffDriveBot class):

We recognized last time that our robot cannot move sideways, and we now encode that in its controller. This type of constraint is called non-holonomic, because it cannot be described by only the position at a specific time (like hitting a person when they are standing somewhere). Instead, the constraint is on the velocity of the robot. But wait, why do we explicitly reject any y-axis velocity components, and then turn around and calculate x and y-axis velocities for the body? Well, there are two things at work here, one fundamental and one coincidental.

Fundamentally, when we talk about position, say , we must know or define the origin of the coordinate system for the position to have any meaning. These origins are known as frames. You can transform coordinates in one frame to another, as long as you know the coordinates of one's origin in the other frame. Every object has a local frame or body frame that is fixed to it. Our robot's local frame is at his physical center, with "forward" arbitrarily defined to be in the positive x direction. The world frame (in our case, at the bottom left of the window) is where we do many of our calculations, since it is a convenient choice to transform multiple objects into and work on them all together.

Inconveniently, a body's velocity in pymunk is specified in world-frame coordinates. So, in our code, we will calculate a heading and direction between two world-frame coordinates, calculate a command in the robot's local-frame, and then the robot must set its own velocity in world-frame. Yuck. Fifty percent of robotics is mucking around with transforms. However, in a real system, the control loop code would be sending hardware commands rather than doing a weird transform.

Our controller is fairly simple; it just takes commands and directly executes them. A control loop has to be fast, so we must usually offload more intensive or long-running tasks to other threads or processes. Planning what action to take or how to take an action is often one of those tasks. In our case, we want to plan an appropriate set of motions from the start to goal positions, and then turn that plan into commands the robot can execute.

With a little forethought, we can be good software engineers and separate the planner from the execution by deciding on a generic language the two can communicate in. Since we're trying to move through space, let's describe the path the robot must take, and leave the details of how to execute that path to another module. A path is an ordered series of poses or configurations. There is no information regarding velocity, or any details of execution.

Let's see the representations in code:

A pose represents a full configuration of our mobile robot, and a path is just a series of poses.

Now, let's see how we can generate a path based on our previous math.

Pretty straightforward. First pose is pointing in a direction. Next is at the goal position, the only waypoint we care about or need for our kind of motion. Finally, another rotation to fully specify the final pose. This may seem like an overly simplistic algorithm, but it is actually optimal2 in terms of shortest path length! It is just a straight line after all.

Now that we have our plan, how to convert the path into specific velocity commands our robot can execute?

Pretty long, but let's take a closer look. The first part is just getting the next part of the plan. We then do the linear calculations, allowing some tolerance because while the world may be continuous, our control cycles are still discrete and we may miss hitting our target if we don't happen to run at exactly the right time. When calculating the angles, we normalize them to put them in the open set (since they are not guaranteed to be there) so we can easily compare and work with them. Again, the angles are tested for equality to within some tolerance. If the next target pose is a rotation or translation away we command the robot with simple velocities to move toward the target.

Note that this target to command calculation is assuming the plan has been constructed such that this simplistic function will work correctly (i.e., the waypoints are each independent rotation or translation only). If we created a waypoint that was both a rotation and translation away from our current position, we would spiral outward and likely miss our target completely. We would need a more complex system of determining commands from paths to handle such plans.

Tying it All Together

So where do we call our planner? Let's take a goal as input from the user, do the planning, and inform the controller.

If you have taste, you'll notice my yucky use of global variables in these functions. What's up with that Clint? I trusted you! Well, it's intentional for a lesson.

Most often, different parts of the controller are running in loops in multiple threads, and need to share state between them. The practical way to do this is with locks (mutexes) around shared memory (although for realtime applications you need to do so with non-blocking operations, or rely on atomic operations). We don't have multiple threads running for our controller, but we have independent loops with pyglet.clock.schedule_interval, so I maintain this common idiom for passing data, while ignoring locks for simplicity (and because we don't need them).

If you play with the full implementation, you'll notice that for very long paths, sometimes the robot misses its goal and keeps on going! How would that happen? I specified a tolerance for angular "equality," meaning that we might set off on a heading that is slightly off from what was calculated in the plan. Over a great distance, we begin to diverge more and more significantly from the expected path, and may miss our goal position by more than our positional equality tolerance.

What if we make the angular tolerance smaller to reduce this effect? Then, because we only run our control loop at a certain interval, we may pass that very narrow window in between checks. Why not reduce the robot's speed to decrease the chances it misses the target? Because that's lame. We'd all get impatient and curse robotics for a boring reason, when there are much more interesting reasons to curse robotics. Could we run the control loop faster? In this case yes, but there will be a limit, so there is always the possibility of mistakes at certain speeds.

The fact is, robotics is hard. Information is never perfect, and hardware isn't infinitely precise or fast. To make reliable systems you need to think carefully that your algorithms handle all possible cases well, reduce uncertainty with planning and multiple independent sources of information, and painstakingly tune and test the entire system to your required specs.

Our robot is now autonomous. We have a motion controller and planner, and a high-level command interface. And along the way we learned that robotics is fundamentally difficult. But our empty 2D world is a far cry from reality, and even our simple system is missing one key component. Collision detection.

In the next few articles we will study the basics of collision detection, and implement a framework that will not only allow us to avoid hitting things, but also plan to avoid obstacles and still reach our goal.

The complete code for this article can be found in (or included from) https://github.com/ClintLiddick/robotics_intro/blob/master/roboticsintro/hellorobot/pointclick.py.